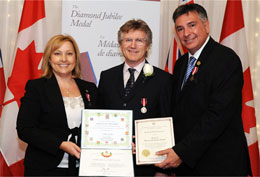 Fourteen prominent members of the Mississauga community were honoured tonight with Diamond Jubilee medals in honour of Queen Elizabeth’s 60th year of service on the British throne.

It was a diverse list that included a rock star, a City councillor and a brewery owner, among others.

Among those honoured was musician Rik Emmett. Emmett rose to prominence three decades ago with the rock band Triumph and has carved out quite the music career, performing with other bands such as The Troubs and routinely expanding his craft by playing an eclectic variety of styles of guitar.

City of Mississauga Ward 1 Councillor Jim Tovey was also among those honoured. He completed his first full year as a municipal politician last December.

Also part of the ceremony was Aldo Lista, owner of the Old Credit Brewery Company. The award-winning brewery was started more than 15 years ago in Port Credit.

Ron Lenyk, CEO of the Living Arts Centre, was honoured as was Jake Dheer, a former Mississauga Citizen of the Year who’s station manager for Rogers Television in Mississauga.

Paul Gillespie served for many years as a police officer with Toronto Police and has worked extensively with the Child Exploitation Unit and, after retirement, became a founding member of the Kids Internet Safety Alliance.

Dianne Lawson has spent more than 40 years volunteering in the community, ranging from teaching children with visual impairments to swim to umpiring T-ball to leading local Cub and Scout troops, among others.

Elisabeth McGregor is actively involved with The Compass, an outreach centre and food bank in Port Credit. McGregor founded the facility in 2002 in response to overwhelming need in the community.

John Rogers has lived in Mississauga for more than 55 years and is active with local charities, sports associations and non-profit organizations. He was named Mississauga Citizen of the Year in 1998.

Elizabeth Taylor has served for many years as a leader with Scouts Canada after joining the organization in 1965. She helped form the Bushman’s Camp to prepare boys for the transition to Scouts from Cubs.

Judith Tutty has been a volunteer with the Mississauga Canoe Club for four decades and was recently recognized with the True Sport Award for her contributions to Canadian sport as well as canoeing and kayaking.

John Vandyk is the founder, president and CEO of Vandyk Group of Companies who has made numerous contributions to charitable organizations such as The Mississauga Food Bank, Trillium Health Centre and the Heart and Stroke Foundation of Canada.

Laurie Williamson, a life-long resident of Mississauga, is also a prominent businessman who has chaired Peel Partners for a Drug-Free Community for the past 12 years. He also supports a number of other charities and was named Citizen of the Year in 1995.