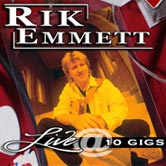 This package is what Rik fans have been waiting for! It’s an official boot leg…let’ say a RIK LEG (way more professional and complete than a bootleg) with stellar up close visuals and never seen before footage

This dvd collection is directed and collected by Rick Wharton of concert performances, on and off stage footage; with behind the scenes/backstage antics and outakes.

Performances on this DVD show Rik Emmett with his band and solo and covers the gamut of musical stylings. From rock to jazz to classical to blues – Emmett fans will be not be disappointed.

Runs 106 minutes- includes Rik Emmett Blinding Slide Show and Rik’s Solo videos from his CD’s Absolutely, Ipso Facto, Spiral Notebook as a bonus. Not to mention the another added bonus performance of THREE CLOUDS ACROSS THE MOON in Toronto @ HARBOURFRONT JAZZ series. This is completely different than the version in Rhode Island show (approximately 15,000 people).  For guitar fans Mike Vassos plays the Rhode Island show and Dave Dunlop is the guitarist for the Toronto show.

This cool looking DVD is a compilation of various concert video recordings and one or two bootlegs confiscated at Rik Emmett concerts and has been enhanced as much as possible, but is not optimized for High Definition or Plasma televisions. Looks great on regular TV’s and computers. It has different styles of film stock ranging from digital to beta to real film.

I love Rik’s multifaceted talents but does this rock ? Look at the DVD set list…You will see amazing up close performances of NEVER SEEN BEFORE footage of GASOLINE, BLOWN FUSE, HEADCASE, and two THREE CLOUDS ACROSS THE MOON versions of the song. What we have been waiting for…Just when you think it’s ending – there’s more.
Dave Allston, Ottawa

It is keeps moving and moving – it rocks – killer – a must have- way different than Live in Cinci.
Barry Ferreira, Rhode Island