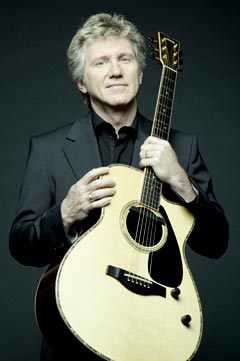 Canadian guitar legend Rik Emmett will
lead a musician’s workshop Sat, Oct. 3
at the Orangeville Opera House
from 3 to 4:30 p.m.

By Adam Martin-Robbins
Originally posted in The Orangeville Banner

Renowned Canadian guitarist Rik Emmett is fairly certain he’s performed in Orangeville before — the trouble is he just doesn’t remember it.

“When Triumph first started in the mid-70s, there were concerts at high schools. Between 1975 and 1977, Triumph probably played every high school (in southern Ontario),” said Emmett, who played with the hard-rock trio until the late 80s. “I’m sure we played Orangeville High School.”

But he says now, at age 56, he has a difficulty recalling those early shows.

No mind, Orangeville will get another shot at making a memorable impression on Emmett when he comes to town on Saturday, Oct. 3 for a musicians workshop at the Orangeville Opera House.

“I do classes all over the place, all the time,” said Emmett, who also teaches at Humber College’s Lakeshore campus. “If it’s largely a group of guitar players, I would share my story and do some guitar playing. If it’s open to a general audience, what I’ll likely do is play a bit and then open it up to questions — just open it up and let it go. I have a fair amount of experience at being able to deliver lectures by the seat of my pants.”

Emmett recently performed at Dundas Square as part of the Toronto International Film Festival following a screening of the new film, The Neil Young Trunk Show. He’s also been pumping out new albums and planning a tour.

The former is called Push & Pull and is a collaboration with Dave Dunlop, Emmett’s partner in The Strung-Out Troubadours. It was released in May. The latter is called Trifecta and features Emmett alongside Chilean-born flamenco master Oscar Lopez and Pavlo. The album is expected out at the end of October, said Emmett, then they’re going out on tour.

That’s more likely the type of performance he’ll give at the Orangeville workshop too.

“In this particular circumstance, I doubt that I’ll bring an electric,” he said. “I think that I’m going to bring an acoustic.”

Local guitarist TJ Whitelaw will also perform to open the workshop, which runs from 3 to 4:30 p.m.

“I am very excited about being a part of this workshop. Mr. Emmett is an inspirational musician and a phenomenal guitarist and I’m very happy to be asked to participate,” he wrote in an e-mail. “I’m thankful to the Headwaters Arts community, Humber College and Mr. Emmett for this great opportunity.”

The workshop is part of this year’s Headwaters Arts Festival, which runs until Oct. 12.

“When I notice the arts reaching out to its different branches and these branches become integrated, I dig that,” said Emmett, of being included in the festival.