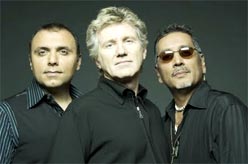 Pavlo, Rik Emmett & Oscar Lopez have developed an incredible musical chemistry, united by friendship and mutual respect. This unique collaboration has resulted in their debut release TRIFECTA, which represents an intense cultural melting pot of their unique styles. Jeff Jodrey recently spoke with Rik Emmett to find out how this amazing guitar trio came to be.

Trifecta is a very involved album that continuously reveals itself with every listen. That’s a real “value add” approach to making a record in this day and age.

There’s more to hear cause there was a lot of time and effort that went into to it, and of course, you’re going three guitars deep. So even though there isn’t necessarily a lot of singing on a lot of tracks or the amount of overdubbing that would exist maybe on a pop record, it’s still a pretty dense record. There’s a lot of interesting percussion and string lines. We spared no expense. The orchestrations and the arrangements and things have got a lot to offer, and so it is a record that gives upon repeated listening. It’s not just a kind of a pop-candy, first-time-you-hear-it-you’ve-heard-it-all kind of thing.

This guitar trio was the brainchild of Pavlo, who then formed a relationship with Oscar, and you came in to complete the brotherhood. As the man who normally spearheads his projects, how did you feel not wearing that hat this time around?

I’ve been around long enough now, and been asked to be involved in enough collaborations that I go into every single opportunity with a certain amount of excitement and energy thinking “wow this could be great”, and then there’s a certain amount of scepticism where you go “well, we’ll just have to wait and see.” You don’t want to necessarily saddle any project with too much expectation, but in the case of this one it had a certain amount of promise, and then when we got together there was a nice chemistry. Everybody was willing to sublimate their egos, and sublimate the whole thing with guitar chops, which is the thing that could probably bend it out of shape or push it outside the envelope of making good music. Right from the inception you could tell that everybody was willing to try to make it be good music, and not make it just an exercise in technical chops. That was very reassuring, and I felt from the very first time we sat down and played that we could make some good music, and write some good tunes. I think there’s a whole lot of upside to this and I can’t wait to get out and start playing some shows. I want to sink my teeth into it more.

What was the composition and recording process like? Who recorded what and what was the atmosphere like? 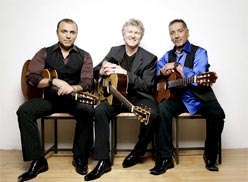 Last year we booked Mike Shotton’s house. He’s got a studio in his basement that Oscar lived in for about a week. We immersed ourselves for 12 to 14 hours a day just writing and recording demos to just sketch things out and get a good sense of the material. It was great because we literally had probably 8 or 9 of songs very fully developed by the end of that time period, and had little sketches of 3 or 4 others. After the fact, I completed “Thousand Islands” on my own and Mike and I edited together some jam session stuff to polish up the compositional form for “Jumpin’ Django”. Then sometime around June or July of 2009 we went back into the studio and just started. The stuff was ready to go, we knew what we were chasing, and there didn’t have to be any more writing. We just had to capture the recording the right way. Mike was great as a co-producer and engineer. He’s also got a lot of chops as a drumming, percussion and programming type of guy.

How did this compare to the “Beyond Borders” piece you did with Ed Bickert, Liona Boyd and Alex Lifeson for Guitar Player magazine a number of years ago?

That was really just one piece that I composed beforehand, and then sent out to the different players. They really just did their own arrangements of sections that I had openly composed, leaving lots of room for them to do their thing. I basically had the whole thing mapped out beforehand, and so we had one rehearsal get-together, and then one day in the studio.

You are a very busy man working on multiple projects, recording and touring. With so much going on, was P.R.O. (i.e. a guitar trio) a personal goal, or something you had a conscious desire to be a part of? 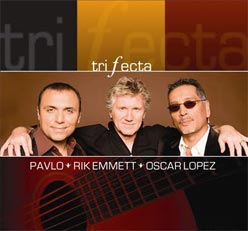 Well I think Pavlo’s initial idea was something like the John McLaughlin, Al Di Meola, Paco de Lucia The Guitar Trio that caught fire a couple of decades ago. At certain points of time in your career when you’re heavily immersed doing one thing, like all those years of being in a rock band like Triumph, you think wouldn’t it be nice someday if I could just make a record of classical guitar, or do an album that was just ‘arch-top jazz’ kind of stuff. I’ve been out of Triumph longer then I was in it and I’ve made so many more records on my own that I’ve kind of exhausted all of that. It’s not like I never dreamed of being in a guitar trio, but it wasn’t like a desperate end goal of mine that I had to be in a guitar trio. I’m always looking for different challenges, and the thing that’s sweet about this is the Latin rhythms that Pavlo and Oscar are so strong at. It’s stuff I’ve never delved too deeply into in my life, but musically it’s great to get into that bag and be chasing it because it’s fresh, new, and quite exciting. I’m outnumbered 2 to 1 (laughs), so it is going to end up having a lot of leanings towards what those guys are good at, and I’m very comfortable with that. I like taking on this role.

You’ve been playing many styles of guitar for your entire career. As a guitarist, how do you embrace and get fluent playing a new style of music?

I think at the bottom of everything it’s always rhythm. There’s three fundamental elements to music; rhythm, melody and harmony, and because I’m a singer I have a fairly strong melodic sense but I’ve always had to work hard to be a good rhythmic player, to have good feel and time, and I think that’s the core fundamental of the group, everything together. That’s where this starts, and that’s where it ends (laughs). The alpha and the omega of playing with these guys is rhythm.

The official P.R.O. tour kicks off in January. How will this tour differ from your normal touring routine?

This is going to be a more intense tour than I’ve done in quite a long time. Even in the Triumph ‘hey-day’ I wasn’t spending three weekends away from home because we always flew back every chance we got even for a couple of days at least before we went back out again. There’s a run out west on this tour where I’m gone three weeks, and they keep plugging in dates (laughs). One good thing of course, is that it’s not anywhere near as intense vocally. I only have to sing a maybe a couple of times a night, so it’s mostly just guitar playing, and we play sitting down, which is kind of new for me too. So, it will be a little bit different, and I don’t think it will be quite as stressful on the ears as playing in rock bands. I’m 56 years old, so there are certain challenges. It’s not like I’m 22 and I’m willing to sleep on the back seat of somebody’s van in order to catch my shut eye. I do ask “Is that going to be a four star hotel at least? (Laughs)”

Can the audience at a P.R.O. concert expect any surprises in the set list that might include some re-envisioning of pieces from your individual repertoires?

I don’t know if we’re going to go there. We’ve talked about that because we’re obviously going to cover the entire album because it’s all we’ve got. Since we may need to supplement some material there may be some moments where guys will pull something out of their own trick bags. Lately we’ve been talking about having some arrangements of some Beatles tunes, because there’s some stuff from the Rubber Sole album like “Norwegian Wood,” and the White Album’s “Blackbird” that lend themselves quite beautifully to guitar. Oscar was sitting in my living room the other day and he was strumming and singing a version of “Little Help From My Friends,” and it was quite charming to hear him singing. So I thought maybe we should have a little bit of that in the show, because if it’s going to be soft seated theatres, that’s the kind of thing people will be very interested in, and it would be fun for us since it’s something we’ve never done before.

With your new friendship and musical rapport with Pavlo and Oscar, will there be more P.R.O. to look forward to, or do you think you’ve said all you need to say with Trifecta? 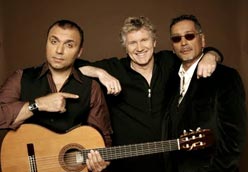 We’ll just have to play that one by ear, but I think there’s a future in any musical project once it starts, but you just never know what’s in the cards, or if it’s going to catch on. I have every reason to believe that this is going to do very well. Initial indications seem to be that people really love the record, and the media seems to be quite interested, so given all of those things you kind of think “Yeah, this might be something that may become more and more of my life then maybe some of the things I’ve done in the past.” I don’t like to necessarily spend too much time trying to prognosticate or guess what the future holds. I think life is a lot like a game of golf, you know, you hit it, then you’ve got to go find it, and then when you find it you’ve got to figure out where it’s lying, and then you have to play it where it lies. So that’s kind of what we’re doing, we’re just standing at the top of the first tee (chuckles). Who knows what’s waiting on hole number seven.

Do you have any other projects or collaborations on the horizon?

I don’t think so, given the relationship that I have with Dave Dunlop and the Troubadours, which is a logical, ongoing, who-knows-what–will-happen-next kind of relationship. Then there’s the possible Triumph reunion, so who knows if something might start bubbling up from under there. I have been thinking about writing a book, I don’t know what it will be about yet but there’s enough stuff that comes out of my teaching and the stuff at Humber where I think that I could write a book about something in the music business and my life in the music business, but that is still probably 3 to 5 years away.

Jeff Jodrey lives in Halifax, Nova Scotia with his wife and family. When he isn’t writing, performing, recording or teaching guitar, he can be found flying helicopters or interviewing great Canadian artists for the Tuesday Guide.