Clash at Comerica a Chance for Father, Son to Show Talents 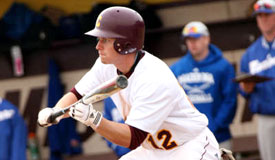 I was up in Mount Pleasant, Michigan over the weekend, and did a father-son interview beside Brendan (and Jeannette was sitting in the hotel room too, so she got a quote in there as well!)

Quite an awesome weekend, as the Chips took 2 of 3 from conference-leading Kent State – followed by the annual Athletic Awards banquet, where the baseball team won awards for scholarship, and won the Dick Enberg Team Leadership award as a team, for its scholarship, combined with athletic achievement and community service involvement.

On the Honor Roll again, Brendan received the Mid Atlantic Conference Presidential Award, and was inducted into the NCAA Honor Society, for maintaining a GPA above 3.5 for his entire college career.

Finally, as President of the Student Athlete Advisory Committee, he delivered the closing keynote address: and I was so proud of him, I popped buttons and fought back tears & throat lumps constantly.

Tomorrow, I’m singing the U.S. national anthem in Comerica Park. Then I’ll get to watch my son play in a ballgame. How cool is that?