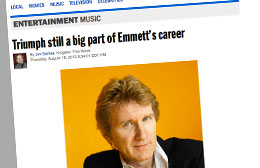 For 18 years, Rik Emmett was estranged, both personally and professionally, from the two other members of the legendary Canadian classic rock power trio Triumph.

But a melting of the icy relationship between him, Gil Moore and Mike Levine in 2006 has led to a rekindled friendship and working relationship that continues, on and off, to this day.

After the acrimonious split in 1988, Emmett went solo and released 17 albums, covering a host of musical styles and genres, in the intervening years before reconvening on stage with drummer Moore and bassist Levine for a pair of Triumph-ant reunion shows in Sweden and Oklahoma in 2008.

In the interim, Triumph was elected into the Canadian Rock, Music Industry and Juno halls of fame, released a revamped greatest hits package and a special-edition vinyl release of its most famous album, Allied Forces, last year on its 30th anniversary.

Throughout Emmett’s solo career, Triumph songs worked their way into his live stage show here and there, but in recent years, he has begun playing ‘The Music of Triumph’ shows with a full rock band, or an acoustic group, keeping his fans and Triumph fans in general hoping for a full-fledged reunion.

Emmett will be bringing his rock show to The Sound Academy in Toronto on Thursday, Aug. 23, a few days before Triumph releases a special DVD/CD package that encapsulates the band’s first reunion show at Sweden Rocks outdoor festival in the summer of 2008.

“It’s been a while getting this out, but my understanding is that there has been a lot of technical issues,” said Emmett from a cottage in the Muskokas. “The way that it had been shot by the Swedish crew, transferring the files in order to be able to edit them digitally, there was something technical that held up that transfer. And, in truth, with something like this, it’s not a priority for Gil. It’s not a priority for Mike, and it’s really their bailiwick. I don’t have anything to do with it in terms of ownership or production.

“For me, the stuff sort of disappeared into the Crab Nebula for a while and then all of sudden I got a call saying, ‘Hey, Rik, do you want to come in and check out this stuff?’

“And they brought in a guy named L. Stu Young as the remix guy, and when I heard the stuff I went, ‘Whoa, this is not how it sounded when we went onstage. This sounds amazing.’ The guy really knows what he’s doing and he made it sound big.

“When you play an outdoor stage, it’s a very weird, dry kind of environment. You play a big guitar chord and it’s not like it’s resonating and bouncing off the walls of the building because there is no building. You just kind of play it and it floats out there and it’s gone. So I am sure there was a lot of time and energy spent in tidying the sound up and cleaning it up.”

Emmett said as with any live video, it’s a time-consuming process to synch up the audio with the video, make sure there are good shots of each of the band members, and also have good crowd reaction shots.

“I think in the final analysis, the issue is one of legacy for Gil,” said Emmett. “I really think that he thinks something like this is going to stand for the rest of our lives as the ‘Triumph Reunion.’ This was a fairly large event in our lives, and is it good enough to be part of that legacy?’ ”

Emmett harkens back to another live performance that has come to be a significant part of the band’s enduring legacy — the US Festival in California in 1983. Triumph performed a set in front of a quarter of a million fans, sharing the stage on ‘Heavy Metal Day’ with the likes of Ozzy Osbourne, Van Halen, Motley Crue and Judas Priest.

“And we ended up putting that show out on DVD a few years ago, and for Mike and Gil, things like that will stand as the legacy of what Triumph was, who Triumph was,” said Emmett. “I think that also might have been holding things up because they wanted to make sure it was good, and it was right. I think the thinking was, ‘Who cares if it comes out quickly, all that matters is we get it right.’ ”

So, whenever a new Triumph product is released, the inevitable question arises — is the band going to tour again, especially in its home nation.

Emmett has been on record a number of times saying that he welcomes the chance to play Triumph songs with Moore and Levine again but that it has been those two who have resisted.

Part of the reason is that they hadn’t performed much since the early 1990s (Triumph released an album called Edge of Excess in 1993 with Toronto guitarist Phil X replacing Emmett), focusing on developing a successful production company, recording studio and recording school called Metalworks, which was originally the band’s own recording studio.

“If the carrot was big enough and golden enough, I think it would make Mike and Gil, but especially Gil, do it,” said Emmett. “And we have had inquiries. Gil has a great life, and he’s content, and he makes a lot of money and he runs that Metalworks things and it’s very fulfilling for him. He’s got a life where he loves to play golf a lot with Tom Cochrane and Alex Lifeson (of Rush) and it’s a fairly time-consuming hobby.

“So if he decided to go out on a Triumph tour, I think it would cost him some gold, and would cost him some family time, and he kind of looks at that and wonders if it’s worth it. And I don’t say that with any shred of negativity. It doesn’t matter to me if we play again. I can always find something to occupy my time and energy and make music in different ways.

“But I do like playing with the guys. It’s fun. And we go out for dinners together and we’re hanging out again and laughing and joking. The reunion shows, for me, was the real lovely bit of us being back as friends again, for Mike and Gil much less so.

“For them, they don’t need the playing of the music to return to the magic of the brotherhood thing. And, honestly, when I look back on it all now, doing the Sweden thing and the Rocklahoma thing, yes, there was the money, but I think it was pretty much Gil and Mike saying, ‘You know, I think this will close the circle for Rik. This will be the thing that will make Rik feel the happiest that this has all happened, and that Rik will feel like it has been done right.’ And so it got done and now there’s really not anything compelling them to do it.”

Emmett said both Moore and Levine would do a full-on Triumph reunion tour if they could headline bigger venues, where they could whip out all the bells and whistles of the live show that made a Triumph concert a true arena-rock spectacle and one of the most intense live experiences on the road at the time.

“But if you ask me, in my guts, do I still think there are one or two gigs left in us, I would say yes there is probably the likelihood that something will come along, like maybe some big charity gig, that would get the guys to say, ‘OK, we’ll strap it on one more time.’ ”

In the meantime, Emmett is as busy as ever, releasing a new live album with his musical partner Dave Dunlop under the Strung Out Troubadours (or Troubs) banner, of acoustic Triumph material called Then Again, as well as a long-awaited solo concept album called Marco’s Secret Songbook.

Jim Barber is the editor of Kingston This Week and the Napanee Guide and a veteran music industry journalist. Contact him at jim.barber@sunmedia.ca.