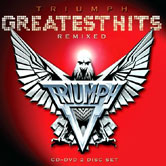 Few acts could whip an arena full of rockers into a frenzy as Triumph did throughout the late ’70s and ’80s, when the group’s best known line-up – guitarist/vocalist Rik Emmett, bassist/keyboardist Mike Levine, and drummer/vocalist Gil Moore – were at the peak of their powers. And it’s this exact time period that is
focused on throughout Triumph’s new “best of” set – ‘Greatest Hits: Remixed’ – released May 18, 2010.

Whether you’re a long-time Triumph fanatic or a new convert, you have never heard the group as crystal clear and loud n’ proud as you will throughout ‘Greatest Hits: Remixed.’

All of the classic tunes that were – and continue to be – in heavy rotation on rock radio (and the early days of MTV) are included here, namely, “Lay it on the Line,” “Hold On,” “Fight the Good Fight,” “Magic Power,” etc. These fourteen tracks of anthemic metal have never sounded so good, as they were all recently remixed by Rich Chycki (who has previously worked with Aerosmith and Rush). The set also includes a previously unreleased recording – “Love Hurts” – which will be the leadoff single.