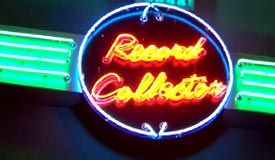 The Record Collector, Bordentown, NJ was “voted #1 as the favorite independent record store in the tri-state area” by Details Magazine, and received honorary mention in Spin Magazine online in an article listing best record stores in the USA. At last count the store held over a million LP’s, 45’s, and CD’s!

The Record Collector also has a live music venue.

Every weekend “The Living Room Concert Series” is packed with great live music with some of the greatest talents in the world.

← Prev: PRO (Pavlo, Rik Emmett, Oscar Lopez) in Kingston ON on Feb 28 2011 Next: Jason McCoy: Christmas at the Grand Premiere’s tonight! →
Back to News Page