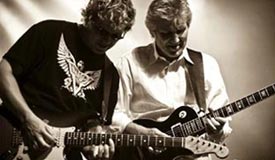 Rik Emmett and Dave Dunlop back in Montreal!

Emmett, guitarist and singer of the Canadian Rock group TRIUMPH, and Dave Dunlop return to Montreal for an intimate concert that no guitar fan should miss.

In 2007, Rik Emmett & Dave Dunlop, under the name of “Strung-Out Troubadours”, won the categories “Album of the Year” and “Group/Duo of the Year” at the Canadian Smooth Jazz Awards. Rik and Dave were also nominated in the category “Best Guitarist”, an award that Rik won in 2005.

← Prev: Rik #44 on Gibson.com’s Top 50 Acoustic Guitarists of All Time! Next: Rik and Dave back in Montreal! →
Back to News Page