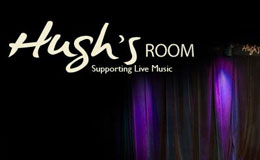 A crowd-pleasing dining experience is the perfect warm-up act to every performance at Hugh’s Room — one of Canada’s premier live music venues. 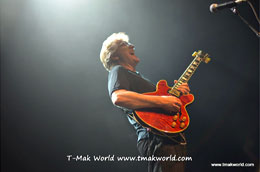 36 years ago Rik Emmett sang the lyrics above, and they are the perfect intro to this concert review, read on to find out why. In our earlier article “Toronto’s Upcoming Must See Concerts Summer/Fall 2012“, we pointed out that Rik Emmett would be playing Toronto’s Sound Academy on August 23rd. We stated:

Do not miss one of the world’s best guitarist and founding member of Canada’s best ever hard rock band Triumph. Home town boy Emmett is still very active as a recording artist even though he left the blinding light show and laser majesty of Triumph 25 years ago. Emmett is a member of the Canadian Rock Hall of Fame, the Music Industry Hall of Fame, and the Junos Hall of Fame. He has 17 solo albums released since his Triumph days, and they include progressive rock, jazz, acoustic duos and classical guitar records.

Before the gig we were fortunate enough to have interviewed (read it here) Rik Emmett and his touring partner Dave Dunlop. We asked Emmett what we could expect for the Sound Academy show and Emmett answered “.. plenty of classic rock: old Triumph hits, and some covers also show up … a bit of Led Zep, Joe Walsh. There’s also a traditional Emmett thing where we play an instrumental, Three Clouds, very Santana-meets-Allman-Brothers, and all the lads get a chance to blow their brains out. We kick it Old School – and my Gibson arsenal will be at hand. I might even pull out the doubleneck for a song …”

At 8:45pm the Lucas Stagg band were revealed as the opener for the night. A bit of southern rock influence with a bit of country and western that at points sounded like a Pink Floydian Meddle type of jam. Interesting blend of music for their 40 minute set and their music was mellow and laid back. They were quite good but the wrong choice as an opener for tonight. When the curtain closed the crowd begins to inch forward and fill up the space in front of the stage.

The Rik Emmett band which features Dave Dunlop on Guitar, Steve Skingley on Bass and Mike Churchill on Drums take the stage and start off with a blistering 7 minute of the Triumph classic – Lay It On The Line. Emmett sounded as incredible as he did on the original albums and the crowd did not need any warming up – they were into this concert in a big way from the first song.

Emmett then jokingly states that he “didn’t expect such a big house and maybe he should make a comeback” and that he wants to “take us back to 1981 for a song Gil Moore wrote called Allied Forces”. At this point one gets the sense that tonight’s gig is going to be a full on Triumph assault as a 1-2 punch of major Triumph hits are presented.

Before the next song Emmett tells the crowd to set the classic rock time machine to the 1970’s “which I am sure all of you remember well.” The crowd responds in kind but one of the largest cheers of the night comes on Emmett’s next line:

“My good friend Mike Levine is up there somewhere” (pointing to the upstairs VIP area of the club).

Of course Triumph fans will immediately know that Levine is the bassist of Triumph. Hopes were high that Levine would join Emmett on stage for at least one song but tonight was not the night for that unfortunately.

The time machine was first set to 1986 for Somebody’s Out There, which led right into 1977’s Rocky Mountain Way and Led Zeppelin’s Whole Lotta Love with Emmett doing both the Page riffs and the Plant vocals (including the famous screaming “looooove”) with mind numbing accuracy. There is no doubt at this point that Emmett has transported the audience and himself to the 70’s as promised.

The interesting thing about this concert was Emmett’s backstories between songs. We thus find out that his favorite Triumph album was Allied Forces and the next song was Ordinary Man from that album that Triumph never played live for some reason.

An acoustic guitar battle with Dave Dunlop is next on “Midsummer’s Daydream”. This song truly showed that Emmett is indeed a wise mentor in teaming up with Dunlop whose guitar solos and showmanship shined every time the spotlight was on him. Dunlop clearly has the skills to do guitar battle with the grand master Emmett, and at times the protege outplayed the master. As soon as the musical exclamation mark is finished the crowd gets treated to the Triumph epic classic Never Surrender. I have stated a few times this was a full on hard rock show and I couldn’t help to keep thinking how disappointing it was that Triumph has not toured in 2 decades and have no plans to do so in the future.

The instrumental Three Clouds Against The Moon is the next song (from Emmett’s solo catalogue) and for this one we get to see each member of the band take the spotlight and show off their musicianship. Truly a highlight of the night this is old school rock and roll jamming at its best.

The main set ends with the very strong “Fight The Good Fight” and the Sound Academy is exploding. Everyone in the audience knows that they were very smart to have come out to this show as this is the closest Toronto has been to seeing Triumph and all their musical wizardry since the 80’s. Emmett, Dunlop, Churchill and Skingley brought an higher level of hard rock musicianship – one than I have ever rarely seen.

The band comes back for a single encore that Emmett introduces by saying “I started doing this thing as a teenager, … and my whole life I have been able to make a living making music.. i am 100% grateful….thats the Magic Power”.

This show was practically a full-on Triumph gig! Aside from the lasers and the massive old school Triumph light show missing, musically we were transported to 1975-1987 and let there be no doubt, although Emmett has been dabbling in jazz, classic guitar, and acoustic music for the last 20 years, this was a pure hard rock show of the highest caliber. I can understand that Emmett is interested in many more musical styles but the joy in his face was undeniable every minute he was rocking hard. All Triumph fans can only hope that tonight re-light a spark in Emmett’s soul and our dream reunion happens before its too late. Just like the lyrics at the beginning of this review – Emmett did feel it in his soul.

Verdict – 5 out of 5. The very full Sound Academy saw a level of musicianship that is very rare these days. We had very high expectations for this show when we walked into the venue – not only were they met they were blown away. My only disappointment was not being able to convey my appreciation to Emmett and Dunlop after the show – if you are reading this guys – thank you for taking me on a euphoric musical journey!

Get your tickets here!

Rik will be performing at Sound Academy in the rock quartet format along with Dave Dunlop (guitar), Steve Skingley (bass), and Mike Churchill (drums).

This will be a rocking show you don’t want to miss!

Get your tickets now!

Previously known as The Docks Waterfront Entertainment Complex or The Docks, the Sound Academy is a concert hall/nightclub with a capacity of 3,230 occupants over 13,240 square feet (1,230 m2) of floor space located in largely industrial Port Lands area of the city along the shore of Toronto Harbour.

Previously known as The Docks Waterfront Entertainment Complex or The Docks, the Sound Academy is a concert hall/nightclub with a capacity of 3,230 occupants over 13,240 square feet (1,230 m2) of floor space located in largely industrial Port Lands area of the city along the shore of Toronto Harbour. 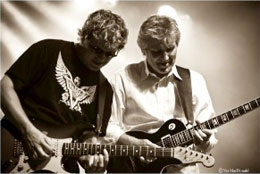