Cover tunes are always a mixed bag depending on the tastes and skills of the performers. Walk Off The Earth’s recent viral explosion with their cover of Goyte’s “Someone I Don’t Know” was nearly identical to the original, except all five band members did a stunt performing of the song on a single guitar in situ.

With famous profile acts the results are, traditionally, extremely predictable. Rod Stewart doing “Heard It Through The Grapevine” and “Let’s Get It On” elicits an immediate yawn; Eric Clapton lighting into Howlin’ Wolf, Muddy Waters and Robert Johnson? Qu’elle surprise.

With The Troubs, a duo that stars long-standing guitar virtuosos Dave Dunlop and Rik Emmett (Triumph), the stakes are high and expectations higher. When I heard about such a project I had no doubt that these two could pull off some incredible playing but the lynch pin was going to be the song selection and their execution.

“reCOVERy room 9” delivers on all fronts.

What the two gents have done is chosen songs that are not, generally recognized for their guitar content with the exception of The Police’s “Message In A Bottle” and Don Henley’s “Boys of Summer”. The duo added its own mark to these songs and filled in the gaps where percussion (the former) and keyboards (the latter) once occupied the arrangements.

While songs like “I Hear You Knockin’” and “Born to Run” were initially guitar based, The Troubs double the flavour. The bump and grind of “I Hear You Knockin’” gets a new coat of paint as a more bluesy offering and “Born to Run” chugs along briskly without being bogged down in the E-Street Band’s histrionics from the original.    There’s a nifty reading of “Superstition” blending the gritty Stevie Wonder vocal performance with Stevie Ray Vaughn’s guitar arrangement that’s refreshing, considering the pedestrian beating the song still gets from karaoke singers and basement bands around the world.

A daring move is the all-guitar driven piano ballad “Always a Woman” by Billy Joel, which could have easily fallen into singer-songwriter Open Mic territory. Instead, the song is given full scrutiny and only suffers with a weird vocal turn in the choruses. Even more daring is the nearly satirical rendering of The Beatles’ “I’ve Just Seen a Face” which appears to have been hi-jacked by Southern parody band Hayseed Dixie. Emmett and Dunlop can barely string the lyrics together as you wait for the song to go off the rails. They manage to hold it together long enough for the listener to say “WTF?”

The jewels of this CD are the final two tracks. There is a beautifully recreated version of John Hiatt’s “Have a Little Faith in Me”. Where Hiatt’s rasp always gave the plaintive lyrics gloomy gravitas, the soaring harmonies of Emmett and Dunlop make this a song of hope and redemption. The Troubs stop taking it all so seriously on the last song of the disc. Hearing a straight-laced politico like Bruce Cockburn turn Monty Python’s “Bright Side of Life” into a black comedy jaunt at concerts is nothing compared to The Troubs’ spit-take on Monty Python’s “The Galaxy Song” from their film ‘The Meaning of Life’. Some may not believe it, but this near-Vaudevillian version has a little more satirical zing than Eric Idle’s flowery orchestrated version.

If you’re going to buy any cover albums this year, I suggest “reCOVERy room 9” if for the final tracks alone. Here’s hoping there will be a volume 2.

Recorded live in the fall of 2011 at Room 9 in Toronto, Canada, Rik Emmett, the former guitarist for Triumph, and his Troubs sidekick Dave Dunlop whipped out nine covers, performed acoustically, in the studio. The album has a real live feel to it that makes it seem more like a live performance than a studio offering.

Emmett is one of the best The Great White North has ever produced. The years have been kind to him, as he still retains his unique vocal styling, while his guitar skills are better now than ever.

Always a talented acoustic player, Emmett shines on the Troubs rendition of the Police classic “Message in a Bottle” and the Don Henley classic “The Boys of Summer.” These are two of the finest songs played as each retains much of the original but still works very well unplugged. The Billy Joel song “Always a Woman” works great on guitar without the famed piano man’s input.

“I Hear you Knocking” and “Born to Run” are both interestingly done acoustically, however, they are not as strong as the aforementioned covers, or the awesome versions Emmett and Dunlop perform of the Beatles “I’ve Just Seen a Face” and John Hiatt’s “Have a Little Faith in Me.” The CD ends with a nod to the best comedy troupe from England, Monte Python, in the form of “The Galaxy Song.”

Anything Rik Emmett is involved with will be done with finesse, class and professionalism. He is a consummate performer and Dunlop is the perfect person to play with Rik. The duo obviously is having a great time paying homage to their peers. One would not necessarily know that from the album cover, as it appears both performers are nodding off into the darkness. Don’t be fooled by the photo though, as these guys put on a great, albeit, mellow acoustic set that showcases the softer side of Rik Emmett.

reCOVERy Room 9, the latest album from The Troubs (Rik Emmett & Dave Dunlop) has climbed to #6 on Maple Music Top 10 Sellers list. This marks the 4th CD by The Troubs to go top 10 at Maple Music.

Order your copy today and help us climb to #1! 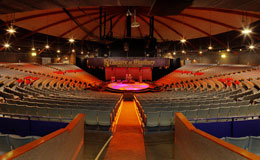 The Troubs to play the NYCB Theatre at Westbury in New York warming up for Louisiana Music Hall of Fame’s hard-rocking Zebra!

Recognized by audiences and performing artists as one of the most comfortable, friendly, and acoustically-inviting theatres in the greater New York metro area, the NYCB Theatre at Westbury presents a broad range of acclaimed performers geared to virtually every entertainment taste and interest.

The Troubs to play the NYCB Theatre at Westbury in New York warming up for Louisiana Music Hall of Fame’s hard-rocking Zebra!

Recognized by audiences and performing artists as one of the most comfortable, friendly, and acoustically-inviting theatres in the greater New York metro area, the NYCB Theatre at Westbury presents a broad range of acclaimed performers geared to virtually every entertainment taste and interest.