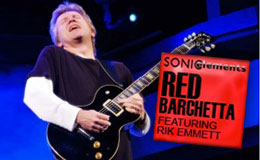 ← Prev: Rik interview on CBC Radio tonight at 5:40pm (ET) Next: Rik sampled on Gotye track →
Back to News Page