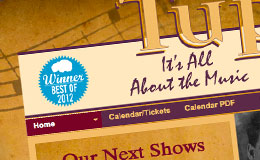 ← Prev: Workshop in Arlington, TX on Fri, Jun 15 2012 Next: An interview with Canadian guitar legend Rik Emmett →
Back to News Page