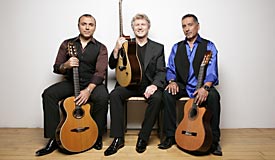 Pavlo, Rik Emmett and Oscar Lopez nominated for a Juno in the “Best Instrumental Album of the Year” category for their new album “Trifecta“.

The dashing, recently formed acoustic guitar trio, now on a 29-city tour across Canada to promote their debut CD Trifecta, dropped by the Arden Theatre Feb. 26 and 27. And make no mistake, the crowd loved them.

Like newfound lovers, they constantly surprise. Well into the first set, Pavlo turned to the to the other two and asked, “Can I tell them the news?”

“On Wednesday, they are going to announce the Juno Awards and we’ve been nominated. I want you to be the first to know,” he said before being drowned out by applause.

When the line-up was announced last summer, their melting pot of influences intrigued audiences. How would they blend? Greek-Canadian Pavlo developed an international reputation with his romantic Mediterranean sound. Chilean-born Lopez tears it up with fiery Latin sounds and Emmett has evolved into a cool jazz musician following his starring role as frontman/guitarist for hard rockers Triumph.

Brilliantly using this mosaic of influences, they blew everyone away with original melodies and dynamic musicianship that bore the mark of true artists reinventing the Canadian landscape. While at times the trio was a perfectly synchronized echo, at other moments Pavlo and Lopez would duke it out as Emmett supported with backups, fills and harmonies.

But their two-hour plus show was more than flashy guitar pickin’. The trio had gelled as friends and rocked with a warm onstage chemistry laden with the witty, pointed banter of soul brothers. Some of their jokes were groaners, but the interplay between the musicians was funny and they peppered the show with personal anecdotes and high fives.

Each musician displayed a different personality. The normally flamboyant Pavlo came across as the more restrained businessman. Emmett took on the role of group anchor and quick-thinking professor while Lopez clowned around as a loose cannon, most notably mocking a Latino Lothario image.

“With Oscar, we never know what’s going to happen. That’s the most exciting part of this show. Every night is different,” laughed Pavlo.

Immediately Lopez said, “Do you like my shoes?” while twisting his foot at an odd angle so the audience could better see the shiny shoes reflecting pinpoints of light from overhead spots.

“I know why he bought those shoes,” Emmett quipped dryly. “He likes to look at himself.” And so it went.

They appropriately opened with the electrically charged Latin scented Dance of the Three Jacks before moving on to Melting Pot, a tune full of unexpected, free-wheeling twists and turns that Pavlo captured with his sitar.

They dialled it down with Moonlight on La Costa Nera, a romantic bolero dedicated to all lovers and scaled it back up with Thousand Islands, a fast melody that prompted Lopez to scat before heading into a guitar duel with Emmett.

Family is a big deal for these musicians and they played two tender instrumental lullabies — Viola for Pavlo’s 14-month-old daughter and Niko’s Tiny Carousel for Lopez’s three-year-old son.

In a nod to the Beatles, they sang Norwegian Wood, the first pop song using a sitar and With a Little Help From My Friends. And Emmett doffed his cap to nostalgia and let it rip with some traditional hot rocker moves in B.B. King’s Let The Good Times Roll.