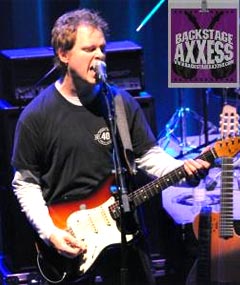 Backstagesaxxess.com had the opportunity to chat with Dave Dunlop, an accomplished guitar player, who has served as the long-time counterpart to Rik Emmett of the 80’s Canadian trio, Triumph.

Dave has devoted 17 years to the music business as a guitarist, songwriter and instructor. His resume includes playing lead guitar and writing with the Canadian band, The Full Nine and later touring and recording with Emmett on a variety of projects including the Rik Emmett Band, a pair of Triumph reunion gigs in 2008, and their most recent project, The Strung-Out Troubadours, for which both have received industry accolades.

He is enjoying continued success with the Troub’s second studio release entitled “Push & Pull,” that recently saw three of it’s songs crack the Canadian jazz top 30 chart. We figured it was high time to formally introduce you to this talented and comedic performer who definitely knows his way around a 6-string.
Enter, Dave Dunlop…

TRACEY: Tell us about your background; at what age did you discover the guitar? Did you take lessons or are you self-taught?

DAVE: Well, I’m an Army brat really. My Dad was in the Military, so we moved every three years. We lived in Belgium and pretty much every province in Canada. In grade 7, I met a guy who needed a drummer, so I went to his place to jam, and as soon as I saw the guitar in the corner and played it, that was it. I ran home and told my mom that I wanted a guitar and some lessons. I took classical lessons for a few years, and eventually went to Humber College to study jazz.

DAVE: Referring to the previous story; my first gig…2 months after meeting the dude who “needed a drummer,” well, we found another drummer, my friend played bass and I played guitar at a battle of the bands at my junior high school. Well, we won the friggin’ thing! My most vivid memory (remember, it’s grade 7) is my Dad coming up on stage in his military outfit to congratulate me.

TRACEY: Who are your influences?

TRACEY: How did you cross paths with Rik Emmett?

DAVE: I was on the faculty of a workshop and he was guest artist. We jammed, it was cool, and at the time he needed a backup band ’cause his guys were off doing some theater thing. That was in 1996…yikes…time flies!

TRACEY: Tell us about your gear (all guitar players LOVE that question).

DAVE: I think I’m one of the few guitar players that is really not that passionate about the gear. I NEVER get my guitars set up…I just play ’em as they are and ( I hardly ever change strings). I confess to adoring my Strat that I’ve had for 17 years…ah Rufus, you’ve been good to me. Thanks to the folks at Gibson, I have a beautiful Les Paul supreme that I record with all the time. And thanks to Dean Zelinsky I have a nice Hardtail for slide. I have a relationship w/ the Traynor folks for amps. I have my beloved 5150 head as well…OK, maybe I like gear a little -;)

TRACEY: What song off Push & Pull is nearest & dearest to you?

DAVE: Two of ’em.” Only Time will Tell,” because Rik wrote a lyric and asked me to write the music. I’m still not sure if he knew how hard the lyric would hit me on a personal level. The other is “Deeper Kind of Blue, p.s.” because Rik wrote it about his brother. Those songs tear us up each and every night. (Ed note: Rik’s brother, Russell, recently passed away from cancer.)

TRACEY: Which song was the hardest to complete & why?

DAVE: “Miracle of Love” was hardest to complete but strictly for technical reasons.

TRACEY: What other projects are you involved in, musically or otherwise.

TRACEY: What is left on your musical career “to-do” list?

DAVE: Left to do? Oh jeez….lot’s… I don’t even know where to start. I’d like to finally get my own record out there (which will happen in 2010) that’s a start. I’d like to write another record with my partner in crime from The Full Nine.

TRACEY: Let’s move on to some fun questions, a “Get to know Dave” Q&A. What superhero power would you want if you could have one and why?

DAVE: I’d like to be able to fly like superman so I could avoid all those friggin’ airports and security, etc. “Rik, I’ll meet ya in Philly, I’m flying on my own…oh, and I’m bringing liquids and gels and my guitar in a gig bag, and security can’t stop me!”

DAVE: I’m addicted to playing hockey and addicted to running. I play hockey twice a week all year-round. Favorite team…well, whatever, it’s the Leafs, but I’m from Toronto, so that’s just the way it is.

DAVE: I had a cat, and developed a bad allergy, so I had to give him to my brother. We never had kids but I have my hands full with my 4 nephews whom I absolutely adore.

TRACEY: What you favorite Triumph song and/or record?

DAVE: I don’t care what Gil, Mike and Rik say…”Just a Game” is the best Triumph record.

TRACEY: I love that one too! Good call. Tell us a funny or embarrassing story involving a particular gig or moment with Rik, Triumph and/or the Rik Emmett Band.

DAVE: Triumph reunion show in Oklahoma (2008). ALL of the pyro and bomb cues were wrong. At one point I was jamming with Gil and a concussion bomb went off at the wrong time. I swear he jumped 2 feet off his stool!!

TRACEY: Anything else you’d like to add or tell the readers at www.backstageaxxess.com? Here’s your chance…1, 2, 3, go!

DAVE: Thanks to backstageaxxess for taking the time to read my insights…cheers!!

For more info on Dave Dunlop please visit: davedunlop.com or myspace.com/davedunlop. Backstageaxxess would once again like to thank Rick Wharton, for always going above and beyond, but mostly for just being so damn cool! Check out his website at www.rickwharton.com